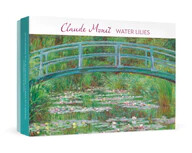 Early critics dismissed Claude Monet’s paintings as hasty sketches. But in fact Monet set himself a goal that was remarkably difficult to achieve, and the evidence testifies that he succeeded brilliantly. Monet was devoted to the pursuit and capture of light—or rather, of its effects on sky, water, and land. Painting quickly to get the “impression” on canvas before the sunlight’s angle shifted too much, he produced work characterized by flickering brushstrokes, indistinct forms, and a truthful record of what he had seen before him at a particular time on a certain day. In 1903 Monet embarked on a series of canvases depicting the water garden at his home in Giverny. In the paintings reproduced in this boxed notecard assortment, scattered lily pads suggest the water’s surface, receding into space. The pattern of light and dark beneath the lilies suggests the reflection on the water-sky and the trees on a distant bank. When Monet exhibited 48 of his waterscapes in 1909, critics compared them to poetry and music. Contains five each of the following images: Bridge over a Pond of Water Lilies, 1899 Water Lilies, 1906 The Japanese Footbridge, 1899 Waterlilies or The Water Lily Pond (Nymphéas),1904